The Link Family – Building Relationships Beyond A Placement 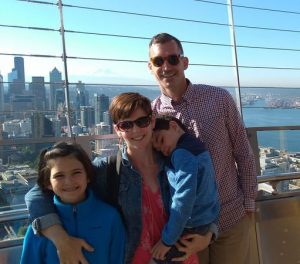 Kathleen & Edwin Link and their two children opened their home to children in the foster care system in February 2018. They decided to foster after Kathleen read a book, Just Mercy by Bryan Stevenson, and was moved by the statistics regarding children who come through the foster care system. The Links, already had two biological children, a daughter age 10 and a son age 6, but reading the outcomes for some children in foster care had moved them. Kathleen recently reflected, “Since we were already parents to our own children, and passionate about youth development and social justice, fostering seemed like a way that we could contribute and help.” The Links applied to become Foster Parents at The United Methodist Children’s Home and underwent the 24-hour, required foster parent training and extensive background checks before being approved as a foster family. In February, they welcomed two young boys into their home. Antoinette Jones, the Link’s UMCH foster care caseworker, remembered those early days of the Link’s first placement:

“The first month of this placement was difficult but, the Link family was committed to these children and fought to make it work. One of the boys in their home was diagnosed with ADHD and put on medication before his placement in the Link home; however, that medication did not seem to be working. As a result, most days the Link family had to constantly chase him and manage outburst. At the same time, while the Link family was trying to manage this child during the day, his little brother would wake up several times at night. Mr. And Mrs. Link took turns soothing this child back to sleep several times a night. It was overwhelming to deal with a child who has ADHD during the day and a sleepless child at night. Eventually, we were able to adjust the medication and the boys both began adjusting to their new routine in the Link home.”

According to Kathleen and Edwin there was a small honeymoon period, but after that, the placement became very real, “It felt unsteady. Like we felt dizzy all the time. Almost like we were learning to walk again. We had to remind ourselves to be gentle and compassionate. These kids needed the chance to acclimate to our home without adding any more trauma to their situation. We worked with them and our caseworker to get things settled down. It took time, but things settled down.” 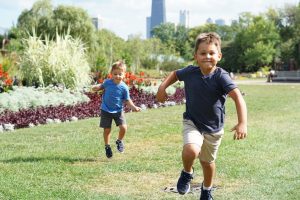 The very first night that the boys were in their home, the Links called their birth mother. “If I were in that position I would want to hear someone’s voice.” Kathleen reflected. The Links called the boy’s mother and told her the boys were safe and that they (Kathleen and Edwin) would keep in contact with her. Since the first goal in foster care is usually reunification with birth family, it is important to stay in contact with birth parents when possible. The Links developed a relationship with the boy’s mom and communicated with her almost daily by text, sending pictures, or allowing the boys to talk to her on the phone. Through the relationship that Kathleen and Edwin were able to develop with the birth mother they knew she was being set-up for success, they knew when the boys eventually returned home, they would be safe and loved. About 70% of kids in Georgia’s foster care system eventually return home to their birth family. As the boys neared their reunification date, they prepared the boys and their own family for the goodbye. “These boys had never had a healthy goodbye, so it was important to us to prepare them. We worked with their therapist and their mom to prepare them for the day they’d go back home. We told them this wasn’t a ‘goodbye,’ just a ‘see you later.’ We are still in touch with them, largely because we took the time to develop a relationship with their mom.” Kathleen and Edwin had this to say about others who may be considering fostering, “The need is overwhelming. If someone even has an inkling that they could foster, then it’s worth exploring. Fostering has made us feel closer to our own children. It is hard, there will be highs and lows, but it’s worth it. These kids did nothing wrong; they just need a home.” If you would like more information on becoming a foster parent, click here.
Read more