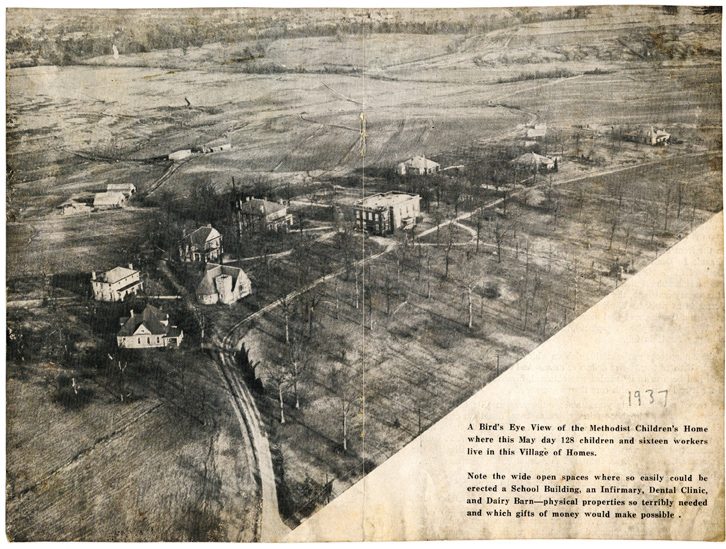 In honor of Wellroot’s 150th anniversary, we’re posting a series of articles focused on Wellroot’s history!

As the world entered into a new century with so much promise and innovation on the horizon, so did the Methodist Children’s Home in Decatur, Georgia. Despite the shortages and setbacks created by the First World War and the Great Depression, the Home experienced a great deal of growth during the first few decades of the twentieth century. The number of children living at the home grew exponentially, as did the number of children who found permanent families and moved out of the home.

The Children’s Home experienced a great deal of change during this time, too. To keep up with the times, they updated outdated curricula in their school. In addition, they provided more modern facilities for their residents, including modern plumbing, access to hot water, and a gas lighting system. Additionally, in 1906, the beautiful Moore Chapel, which can still be found standing on the old campus in Decatur today, was erected.

During this period that “Work Day,” a day on which Methodist Churches in the North Georgia Conference were encouraged to give to the Children’s Home, was introduced. Thanks to the generous churches in the North Georgia Conference at the time, the establishment of Work Day was deemed a huge success, and the funds donated on this day soon became a significant source of income for the Home for years to come.

The years 1917 and 1918 saw the deadly Influenza Pandemic ravage the world, and yet, no cases or deaths were ever reported at the Home during this time, speaking to their resiliency in the face of troubling times. According to its records, the Home residents typically maintained excellent health in a period during which conditions in orphanages were usually sub-par. During these early years, residents at the Home had full access to dental care and a doctor on call.

Nearly one hundred years ago, the leaders at the Children’s Home in Decatur recognized the importance of innovation in their practices and facilities to serve their residents best. Today, Wellroot continues to reassess how best to provide a loving home to children and families in North Georgia.